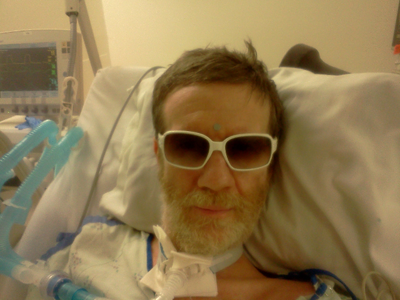 Diagnosed with Lou Gehrig’s Disease in 2005, Tucker has lost the use of his limbs, and now uses a reflective bindi-dot on his forehead to control a complex system of computer technology. Using this technology, Tucker creates “breathtaking images of the frailty and strength of the human condition”.

An artist for over thirty years, Tucker’s art forms can be loosely corralled into the four basic art groups: music, painting, film & lifestyle. He has worked professionally in Boston as a musician, San Francisco as a bohemian, and Los Angeles as a sound designer and film editor.

Flash forward to today, Tucker creates art in a panoply of mediums, at an unseemly rate.